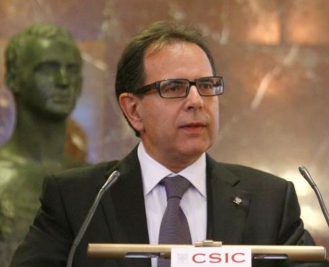 Madrid, Spain 08 February 2011. The Decade Gold Medal of Research and Innovation in Chemistry for 2001-2010 recognizes the scientific career for a hole decade, which has widely contribute to the society. In this first edition, Prof. Corma researcher of the Institute of Chemical Technology (ITQ), joint centre belonging to the Spanish National Research Council (CSIC) and the Universitat Politècnica de València (UPV) was unanimity selected by the panel.

The Vice-president First of the Spanish Government Alfredo Perez Rubalcaba gave this award to Prof. Corma in the framework of the inauguration act of the Year of Chemistry 2011 that took place at the CSIC in Madrid.

Borned in Moncofar, Avelino Corma is one of the most international cited Spanish researchers and one of the 60 most cited chemists in the world. Among his more than 700 scientific publications and more than 100 patents, it is worth to mention his articles in Science and Nature.

The research group headed by Prof. Corma at the Institute of Chemical Technology develop catalysts for refining processes, fine chemistry intermediates, molecules and products for drug production and also for fragrances and food industry. His research is also focused on Biomass transformation to energy and also he is working in photovoltaic cells applications, hydrogen storage as well as fuel cells.