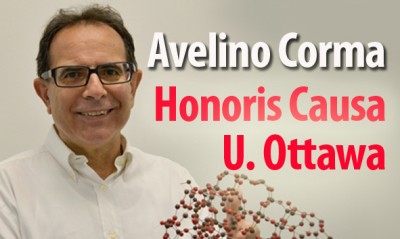 Ottawa, June 2012.- The researcher of the ITQ, Avelino Corma was conferred with the Honoris Causa by the University of Ottawa.

Avelino Corma Canos is the co-founder and former director of the Instituto de Tecnología Química of the Universidad Politécnica in Valencia, Spain. His work has led to that institution being recognized for its excellence in the area of heterogeneous catalysis. Professor Corma’s own work on acid-base and redox catalysis has allowed him to develop catalysts with multiple commercial applications, and he is a recognized leader in catalysts used in refining, petrochemistry and chemical processes. In addition, he is responsible for more 900 research papers (which have been cited more than 15,000 times) and more than 100 patents, including the isopar process for short chain paraffin isomerization, propylene oxide and a catalyst for natural gas transformation. He has received numerous awards, including the DuPont Award on New Materials, the Spain National Award on Science and Technology, and the Ciapetta, Houdry and Boudart awards of the North American Catalysis Society.