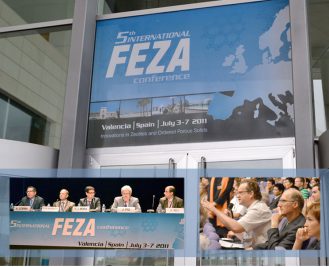 As in previous editions of International Zeolite Conferences (Paris 2008, Prague 2005, Taormina 2002, Eger 1999), about five hundred participants were expected for the fifth edition of this successful series of events. Our most enthusiastic estimations were outnumbered by the final figures of 636 participants belonging to 45 countries. In parallel to the Conference, the organisation of the subsequent FEZA School was also happily received by the scientific community who also responded with a high participation of 81 scientists.

Jointly with a representation of many active research groups in the field of zeolite science, also a high number of companies have backed the Conference either by contributing to funding (23 companies) and by offering seminars and product exhibition (10 companies). It seems clear that zeolite science is actively contributing to the industrial proposals that our society needs to achieve an economically and environmentally sustainable future.

Including talks and posters we have had 513 communications which have been summarised in the book of abstracts, electronically available in our open access web. To reward quality, poster awards were given within each of six topics which defined the topics covered in the Conference: Synthesis and charaterisation of porous solids, Developments of new materials, Modelling and theoretical studies, Petrochemical and environmental catalytic applications, Catalysis for fine chemicals and pharmaceuticals, Separations, and Advanced technological applications. Equally to the high quality of the posters presented we are proud of the scientifically challenging talks imparted, with special emphasis on those given by the plenary lecturers Ryong Ryoo, Michael Tsapatsis, Christian Serre, Jihong Yu, and Ferdi Schüth.

Key to ensure a close contact and scientific exchange among delegates has been the choice of Palacio de Congresos de Valencia as the Conference Venue. Its impressive external architecture is also the home of an extremelly well suited environment balancing natural light an optimal temperature thanks to a recently installed photovoltaic roof comprising more than 2000 modules. The conference centre, hosting a restaurant, has made possible to gather sessions and lunch breaks in the same venue avoiding typical wastes of time and fostering the exchange of ideas and the permanent contact between delegates.
Across the three and a half days lasting, the conference programme also contained ludic time.

Apart from the Gala dinner, with about 150 participants, it has to be highlighted the informal dinner at the typical valencian farmhouse Campoanibal with practically all participants attending. Within the strictly local and authentic recipe, three large paellas were cooked at the sight of an splendid sunset while testing appetisers. The cellebrated dinner was the right prelude for an animated dancing in the disco facilities of Campoanibal where some serious scientists were unveiled as excellent dancers. Names will not be given here for the sake of correctness. And some more were also surprised when, after thinking all had finished, a ten minutes typical valencian firework setup put the final touch of an unforgettable night.

All scientific materials of the Conference were made available to favour post conference digestion of so many new advancements in microporous science. Fundamental an applied science, ordered porous materials, microporous zeolites and aluminophosphates, metal-organic frameworks, mesostructured materials, porous hybrid solids and so on, are some of the topics where developments have been communicated during these few days in Valencia. Eminent personalities of the local academia (Universidad Politécnica de Valencia) and european scientific associations (FEZA Chairman) such as Francisco Mora and Georgi Vayssilov, highlighted the scientific quality of this Conference which continues the high benchmark of the FEZA Conferences and points to the cellebration of the sixth FEZA Conference in Leipzig 2014 (www.feza2014.com).