Marta Feliz Rodríguez was born in Castellón de la Plana (1976) and obtained her Bachelor in Chemistry at the Universitat Jaume I in Castellón (Spain). She did her PhD at Universitat Jaume I (1998-2003) directed by Profs. Rosa Llusar and Santiago Uriel on the development of cubane-type molybdenum and tungsten chalcogenide cluster complexes, with potential applications in catalysis and as optical limiters. During her post-doc, M. Feliz got expertise in reaction mechanism studies catalyzed by transition metal organometallic complexes by means of computational methods like DFT and QM/MM. In a first period (2004-2005), she carried out her research at the groups directed by Prof. Feliu Maseras and Prof. Carles Bo at the Institut Català d’Investigació Química in Tarragona (Spain). Afterwards, she moved to the group leaded by Profs. Odile Eisenstein and Eric Clot at the Institut Charles Gerhardt in Montpellier (France), where she worked for two years. In 2007, Dr. Feliz joined the Molecular Materials group directed by Prof. Llusar at the Universitat Jaume I, where she carried out combined theoretical and experimental catalytic studies with transition metal cluster complexes. After being promoted to Tenured Scientist at the Spanish National Research Council (CSIC) in 2009, she joined the Institute of Chemical Technology (UPV-CSIC) in Valencia (Spain), where she works at the moment.

At present, the principal research lines of Marta Feliz are focused on the development on coordination complexes and organic-inorganic hybrid materials based on transition metals with potential catalytic applications, and combined experimental and theoretical studies of reaction mechanisms. 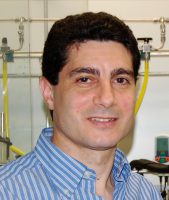