Marcelo E. Domine was born in Córdoba, Argentine in 1969. He obtained his Bachelor (1992) and Master (1996) degrees in Chemistry from the National University of Córdoba (Argentine). He completed his PhD at the Universitat Politècnica de València (Spain) in 2003 under the guidance of Prof. A. Corma. Then, he carried out postdoctoral research at the Institute of Chemical Technology of Valencia (UPV-CSIC, Spain 2004-05), and at the Institute des Recherches sur la Catalyse et l’Environnement de Lyon (IRCELYON-CNRS, France 2005-07). In 2008, he re-joined Prof. A. Corma’s group as a Ramon y Cajal Program reintegrated researcher of CSIC. Since 2009, he has developed his work as Tenured Scientist of CSIC at the Institute of Chemical Technology.

His main research lines involve the synthesis and characterization of nano-structured materials based on supported metals and metallic mixed oxides, and their application as heterogeneous catalysts in acid–base and redox reactions, mainly focusing on the development of novel and sustainable chemical processes, such as the new biomass-derivatives transformations into valuable chemical products. In the last 7-8 years, M.E. Domine has consolidated his research group mainly working on novel catalysts and catalytic processes for the valorization of biomass and its derivatives, as well as other residues (i.e. municipal wastes, plastic wastes, etc.) for obtaining advanced bio-fuels and high-added value bio-chemicals).

M.E. Domine is co-author of more than 65 scientific articles published in high-cited index journals and of 30 patent applications. He has presented his work in more than 80 congresses (nationals and internationals) and has given 25 invited conferences. He has participated in 37 public funded projects being the principal researcher of 17 of them. Remarkably, one important part of his research work is centred in the development of catalytic processes with industrial application in collaboration with chemical, petro-chemical and bio-refining companies, participating in 26 contracts with industry and applying numerous patents (>10 in the last 7-8 years).

He is Official Evaluator of ANEP (since 2009), external evaluator of research projects of the Junta de Andalucía and of PICT projects from Argentina (since 2012), as well as member of the evaluation committees of Marie Curie Fellowships – EU Program (2014 and 2015), among others. Since 2015 he is the CSIC representative at the EERA Program (JP-Bioenergy) and the UPV representative at the CBE JP platform, both of the EU. 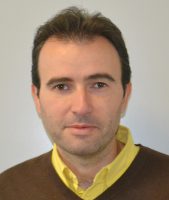